Case of the mondays

Today, I wasn't ME at all. I'm grumpy, and just don't want it to be Monday. To top it all off, I sat in a class all day and 4 more this week to go. So, not much "real" work getting done, especially since I'm not at my cube. I'm in one of the other buildings. I get crabby like this once a month... NO, That's not the reason. It happens the week before reserve drill weekend. I guess, going into the week having class all week, and knowing I don't have a weekend at all, just bums me out. Plus I'm not really happy with my weight/fitness level so that's depressing. Same ole' song and dance. Maybe David will forgive me for snapping at him. :-( 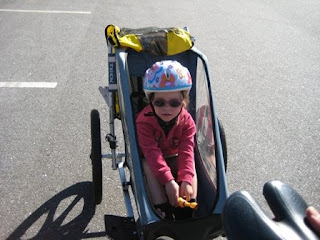 Yesterday was a scheduled ride of at least 15 miles. David thought it would be a good idea for us to all ride together. So, we packed up the bikes, and Grace's trailor and headed to Furman Univiersity. It's a great campus with about 3 miles around the lake with the route we took. But, I gotta tell ya, it was packed. Everyone was out walking, running or taking the dogs on the trail, and we struggled a lot to get around people that were taking up the entire width of it. I'm glad it was such a nice day to enojoy it, but it was more of a hassle than anything else. So, after we hit 6 miles, we decided to ride the "mall" + uphill through a parking lot, OVER and OVER until we got to 15 miles. The mall is just a stretch of road that has traffic circles on each side. It's about a mile around the entire thing. So, you can see where this is going... Talk about repetition. Due to the many stops for traffic, and yeilding every half mile, it ended up being way slower than I had hoped. Even with David towing Grace in the trailor (about 45ish lbs), he still kicked my tail on that uphill. When we hit the mileage and got off the bikes, David threw my running shoes out and told me to go for a short run. I really wasn't mentally prepared for that, so as first I was like "NO". But, I caved and did about 1.5 total.

Today after class, I went for a quick run in my new shoes. I had originally planned to do some hill work, but I knew within the first 1/2 mile, I didn't need that. My legs were very tight from the last couple of days. My left leg was just in pure pain and I had a crappy pain in the right foot. So, I decided to do my looped run with just 1 loop instead of 2, which would give me a very short run. I need to rest my legs from running tomorrow, fo sho.

I'll leave you all with a few more cute pictures of Grace from the weekend. We can't believe how fast she has grown into a little girl. 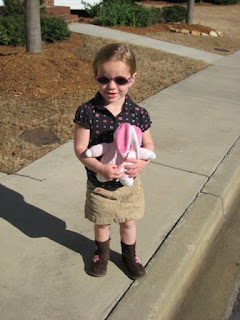 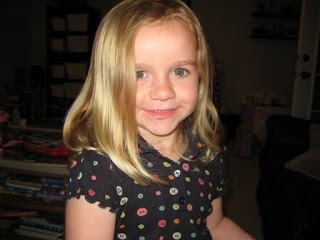 I always look forward to the great photos of the little one! She is growing so fast!

You have been doing awesome! I am very proud of you! Sounds like I am not the only one dealing with a little ankle issue... take care of it! :)

Grace is so stinking cute!!! I love that first pic with her boots!!! Is her hair getting straighter?

You had great workouts this weekends! Whyyyy don't you live closer so that we can bike together? :<(

I realized last week that we never stuck to our diet plan. Let's email about it again, k? I am ready now. (again-LOL)

Great pics and nice work outs. I'm sure David will forgive you. I'm always wishing I was more fit and in a different place, especially when I read blogs. But you are doing great. Hang in there.

Grace is addorable! I bet she enjoys those bike rides too :-)
You did fantastic this weekend with all the workouts,chickie. Cut yourself a lil slack. I mean a 10K than hills on the bike a the mall...great job! I hope those legs losen up for ya real soon.
Sorry, about your reserve weekend. Your awesome, Menday!

She is too cute for words. Definately a mini-you.

And don't worry about a little grumpiness. As women, we reserve the right to snap once in a while.

Somehow, I don't think David forgiving you is a problem :-) Sometimes the open road is better than the walking trails, but not with Grace in tow :-D

Grace is such a cute little sweet-pea! Too cute.

You had an awesome weekend, between the 10K race and then the brutal bike repeats....don't be so hard on yourself. As for the grumpies....I get them too, take it as though it was "just one of those days". You're allowed!

What a great workout / family time. I already know I want one of those bike trailers and a running stroller when I have a little one.

Hope the week gets better for you!!!

That is one precious pumpkin you got there!

OMG HOW CUTE!!! I love her little outfit! Gosh you always make me feel bad. My kids are always running around looking like slobs LMAO!

So you were grumpy on Monday? David said that was normal for you. Just Kidding. I hope the Monday morning blues blow on by and you have a great week.

oh SO CUTE! I want an adorable little midget who will hug me after a tough race/workout. Keep up the training, you will forever inspire Grace.

So do you and David want to do it next year?

I love Grace's skirt and boots, too cute!

Oh you have such a little cutie on your hands!

OMG, that last pic of Grace looks EXACTLY like a mini-Mendy!!!!!!

Grace is definitely your mini-me! I bet she has the attitude to go with it, too ;) You know I know all about that! LOL

You are doing great with your workouts and I'm sure David will get over it. Plus, he probably did something to deserve it anyway ;)

your grace is very cute. i run around in enough circles for the people i work for i wouldn't want to do it after work. glad you got the miles in.

She looks sooo grown-up in that last pic... hair all prettily arranged over her shoulder ;) You're a lucky mommy!

She is just the cutest!! LOVE those little boots!

I go ga-ga over cute girl clothes....I just never get to buy any ;)