That was on my voicemail after I got back from my run (Yeah, peeps I said RUN - that's right). More on that later. Grace sang; Happy Birthday to Mommy, etc, and after she was done, she said "She's not saying anything". Guess she doesn't quite know what voicemail is yet. Rightfully so. She's 3. It was the sweetest thing!

To be all alone on my Birthday, I've tried to make it a decent one. I had planned on going out to dinner and have a glass of wine, a nice one. No crappy wine. But, I needed to eat early enough and quickly in order to get all the things I wanted to do, so no biggie. After I left the command after staring at CBT's (required online courses for me) all afternoon, it drained me. All the words were sounding the same, so I left at 1500 again today, and immediately got on the bike once I got back to my room. I got weird looks leaving, and not the the regulary looks I get because of the spandex, but because all the clouds were dark and it looked as if it could start pouring any second. I'll take my chances. So, it sprinkled a little but a great time to ride. It was freaky windy though and the base sits on the water, so everytime I hit a dead end (at the water), and turned around I was hit with heavy winds.

For those of you that are new bloggers, new stalkers, or new posters - my running has unfortunately been derailed lately. Specifically, at the end of July I was told by Dr. Bob to not run for 3 months because I could possibly have stress fracture in my tibia. I had swollen facia and a pulled hamstring too. I'd have to give the shins some TLC. I did that, not as religiously as I needed to (I must admit), but I have stayed off them as far as no running goes.

I have been surrounded with running since I got here on base last weekend. This is a fit base, with a lot of special forces commands here like, EOD and just lots of people running, and staying fit. Every morning, after I get my venti skinny mocha no whip, I head to the other side of the base and pass lots of lots of sailors PT'ing - running. It's made me miss it even more, knowing I shouldn't run just yet. Well, tonight after my subway dinner, I played the dumb blonde and did it anyway. I set out to do a slow pace, of just 2 miles to see how I felt, while listening to my booty shaking music. Mentally I was 100% there, you know? But, physically my legs aren't 100% back yet. I know that. But, regardless - it felt GREAT! Well, that Dr. pepper was still sloshing around in the bottom of my tummy but whatev.

After the run, I went to the exchange for some water. Only water. Well, I got in there and my instincts led me to the purse section. They pride themselves on have a good selection of Coach and Dooney purses and boy-oh-boy they do. Sa-weet! I've been visiting them a lot, well everytime I enter the exchange.

I left with my water.

And, a little present for me. She'll look cute with her big sistah! After all, it is my Birthday!! 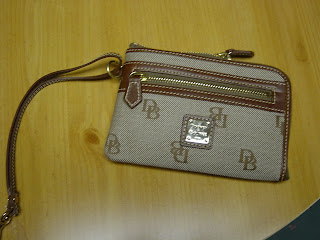 I haven't had a chance to read blogs tonight, so I will have to catch ya tomorrow blog homies!

It's too bad you were alone on your birthday, but if you were here you probably would have been annoyed by all the exotic dancers in the house. That reminds me, I think one of them is watching Grace somewhere...

Happy Birthday, Mendy! We'll celebrate this weekend. And if you get tipsy enough, we'll "celebrate" a little, too!!

Happy Birthday!!! I can't wait to get out there and start again. Glad you felt good.

And good for you for treating yourself to a little something extra!!!

Happy Birthday! Take it easy with the running, no need to hurry back into it.

Thrilled that you were able to run!!! It had to feel weird...but in a good way :)

Just read David's comment. Your husband is TOO Funny!!!!! LOL!!

Sounds like love is in the air :-) Happy Birthday again!!

YAY for a good run!!! I love that you got a present from the base!! Perfect!! Happy birthday girl!!!!!

Take it easy running...you know what you're doing LOL...LMAO at David....

Happy Birthday and way to get back to running! Slowly but surely. The best way.

I dated a guy that was in the Navy and we would go to the Exchange in San Diego. It was hard to not spend lots of moola there.

Gracie's birthday wishes were too cute!

Glad to hear the run was good and it sounds like you are healing.

Love the little birthday present you bought yourself! HECK! you deserve it!

Happy Birthday!! Glad to hear you were able to run

Happy Birthday girl!! I'm sure you are anxious to get home and celebrate with your baby girl!

The weather was a little freakish here the other day wasnt it? And yeah, those dudes on base are hardcore...I usually see them at the Mud Run and they are serious.

Glad you were able to "ease" into running. I love to bike but running is the shiz.....

Have a good and safe trip back home :))

Well, I tried posted with the wrong account. Let's try this again...

What a sweet message to get while you were away. I hope it was a fabulous birthday, Men. You sound great, hope you are on the mend.

Happy Birthday~It looks like the skies parted and the Lord blessed you with nice run and a cute purse.

Check out the PSA, it will make you smile. :)

Hope you had fun (with the GOOD wine!)

Happy BDay! Glad to hear you are able to ease back into running!

Happy Birthday! It sounds like you made the best of a crappy situation (being away from D & Grace)!

Congrats on the run! I KNOW that you are probably super-sike to be "back baby"

Boy, am I late. Happy belated birthday!! I hope you heal up soon.

BTW, I'm back running finally! Come check it out.