This was sent to me by David just a few minutes ago. Okay, I will. Then will ya leave me alone? j/k :-)

The swimming, biking, running is going spectacularly. Is that a word? Anyhoo... it does seem that once I start improving in one of the sports, I fall behind in the others. I am getting better and more efficient in the pool, but my running seems to be suffering. I am getting more comfortable on the bike too, which I'm all smiles about.

Last Thursday, friend and I attended the triathlon clinic. It went very well. I did my scheduled run early in the day (3.10 miles), then with the clinic we wanted to do a 10 mi bike / 2 mi run. We got some instructions from one of the best cyclists around Greenville, Jim Cunningham, and he took us all out for a slow ride, to show us "the ropes", so to speak. Denine and I decided that after our 10.97 mi ride, we'd run about 2.5 miles. I wasn't feeling it all, since I ran earlier, but I knew she wanted to do it. So, we headed out through Cleveland Park and when it was almost over, we realized we were in the pitch black darkness of the night in a park. We did 2.88 miles and headed home! Thanks to my buddy, I did a run I didn't want to do.

David had his first Oly distance Tri of the season this weekend and it was a blast! Except that we could have done without the thunderstorms at race time. We saw so many people that we know and/or know of and got to know some. It is such a great community to be involved in. Lots of wonderful peeps.

Highlights:
* David had a great race for his training ability right now!! Congrats on a great finish!
* After first getting to the pond (packet pickup) about 5 min before closing, we finally got to meet Ashley and she is a true gem! Very friendly, sweet person and super FAST. Placed 3rd in the Elite category. Congrats!!!
* We got to have dinner with Wes and Dee Dee. Again, they are some really nice people and fun to hang out with! If you get the chance, don't pass up the opportunity. It was a very nice time. Dee Dee even took pictures of the tri guys and gals I knew for me because my camera died.
* Teammate of David's, Chris had a challenging time at the tri, due to the swim being long still after the storms, and the bike being cut short. Bummer, but he still produced an awesome time and in my eyes, one of the fastest guys around!
* The other Chris placed 1st in Clydesdale category and he deserved it, producing a great time and was thrilled. Nice guy! Congrats Chris!
* We got to see Robin's friends, Jackie and Eric, there after the event was over. I mentioned Iron Girl Tri to her and I think she's in. My friend from work and training buddy and I will be doing it, and now it looks like Jackie will too, and I think Robin has been convinced to join in too. Over the weekend, I tried to talk Dee Dee into it too, but she would have 3 tri's really close together. That's a lot to do!! I don't know if I'd want to do it either.
* My daughter is just a great trooper! She is the best! She cheers everyone on, and even with the crazy weather (she got really scared of the thunderstorms), she hung in there for a somewhat long morning with a smile to the end. 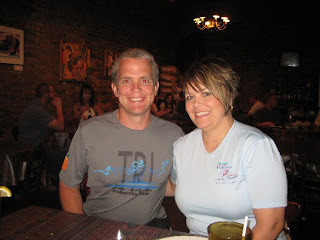 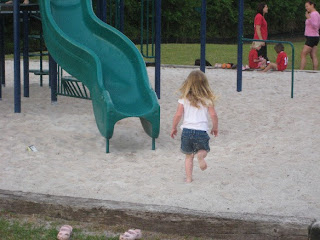 Grace's favorite part of this triathlon - the playground. ...and she's off!!

Although, we seem to do a lot for ourselves, we do do a lot for and with Grace. After her support this weekend, we took her to Putt-Putt (aka Golf to her) and she had a blast. Of course, she's a cheater at the sport and we'll let her be for a few more years, then it's ON like Donkey Kong. (like that, Lisa). 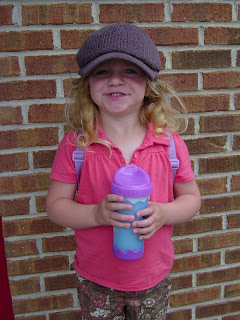 After breakfast, Sunday. This one is for Jess, since she likes Grace's hats. 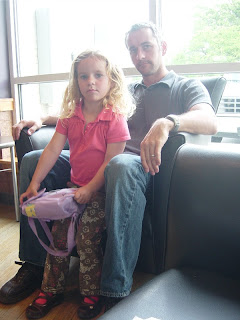 Grace & David at the coffee place. 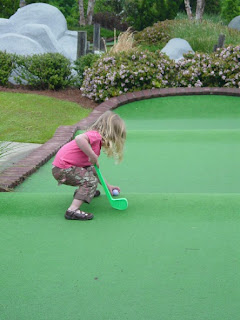 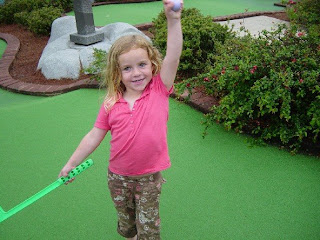 but of course, she won!

I did get to get a run in on Sunday night and it went well. Legs felt great, weather was nice, light traffic and almost no wind! I did 6 miles, which I haven't done that distance since the Cooper River Bridge run.

Today at lunch, I did 3.5 miles and it was uneventful, but it's done. Tonight, We have our Church small group, so I'm done working out for the day.

David hinted the other day that he got me a wetsuit, and although I'm thrilled to have it for my much anticipated (sarcasm here) lake swims, I look like a beach whale in it. But, here it is. Looks like both Lisa and I have wetsuits for our Mother's Day gifts. Luvin' it! 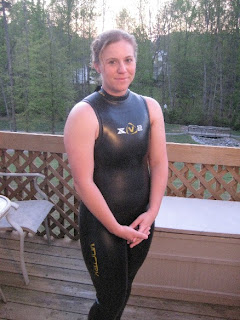 I don't know if I'm a weirdo, am a triathlon freak, or if it's just you, but you look haaawt! Yum-O, as Rachel Ray would say.

You do not look like a beached whale. Neoprene makes you look smooth and sexy!! Woot!

Dee Dee does not have three back to back tris. She's smokin something. I'll start to work on her again. She has Callaway then Irongirl, then a whole month until Canton. I'll see what I can do :-)

Awesome job on the improvements! Sounds like it is all coming together for you!!

Great post. cool wet suit!
Grace is no doubt a trooper and just he sweetest little thing too. It was great to get to see you guys again. who wouldhave thought that we would park right next to each other on arrival and that dave I would be rack mates. Only he is WAY faster than me! :-) (but I did have a dry helmet);-) (na nanana na-na)
How much fun would it be if it was sunny ans say............... 65 degrees! nah, truly boring.;-) I need to brin Elizabeth (our 6yr old) to our nest event so she can meet grace and maybe Grace could give her some cheering tips!

I was wondering how Grace fared at the tri. I was going to ask over on David's blog but figured you'd give us the 411. I'm glad she was good for you :-) You know how they can be sometimes :P LMAO!

You are the nuttiest woman EVA! You look like a woman in a wetsuit not a beached whale! You silly! On the bright side, I hope David helps you with your transition times with that thing ;-)

The pictures of Grace are adorable!!

Thanks for the great recap!! :>D

Love the pictures of Grace!

Great re-cap n what is going on in Mendy's World... Sounds like ur trainings are going good!! I love the pics!! Grace is such a poser --lol what a cutie pie.

You look great in the wetsuit. If I dont do the 5K OWS in Hiawasse,GA on that day, I will be volunteering at the Iron Girl cheering all the ladies on

How do you like your wetsuit, I just ordered an Xterra and should have it Thurday.

Have a good season,

What a great weekend!! Congrats to David on the tri. How awesome you got to hang with Wes & Dee Dee. The 500 yds swim times are somoking. I am so impressed you dedicated yourself to work with you swimming and it is fantastic to see the improvements. Bravo!!

Supah cute Grace pics, glad she was such a sport at the tri. I see no beached whale, refer to my blog for those sort of pics. You look great in your suit :-)

What a great post, way to go David, and it's great to have you and Grace there to support him...that is awesome...Beached Whale...NO WAY...I agree with Wes, sleek and sexy...you rock girl!!!

OH...and Grace is ever the star with or without her hats..but the pic of her and David is waaaaay too serious...tell her to lighten up with Dad....

Hey, that was worth the wait. What a fun post with all the pics and updates. Of course, Grace pictures are always going to be a hit, what a cutie. They look all tough at the coffee shop - don't mess with us. :D

Glad things are going well for you. I cannot even imagine getting in that wetsuit. I think I would have to drink heavily first. You look great. What a fun gift!!

Your husbands comments crack me up. "Hawwwt". LOL. Sounds like how Hairy Carey (sp?) would say it.
You are such an inspiration to me! Keep up the good work!

SWEET wetsuit!!! You are all set now! Looking forward to doing a Tri with the girls. Just want to have fun adn mix things up :)

Now when it the open water practice swim?

I love the pic of you in the wetsuit! You look fabulous!