* Been to the dealership 3 nights in a row, staying late.
* Skipped Church group last week to spend that time at a dealership. (Bad).
* Bought a Mom-mobile.
* Worked really late 2 nights in a row last week.
* Spent some relaxing time at NorthHampton Wines, and ended up meeting some people that attend the same Church we do. Small world.
* Swung by Lowe's one night and dropped a LOT of money for Carpet and installation.
* Had 16 hrs of Reserve duty, most of which I spent those hrs very angry at someone, which ended up in an open door, very loud argument. Yes, I will win this one.
* Dropped some sailor language while at drill. (see above)
* Attended a traditional Navy Ball decked out - had my share of beers, but not too many. Thank ya
* Did the cha-cha once.
* Semi-completed a project at work that's been in the works since July. Yah! (Reason for the late nights) Still have some modifications but only after in store-pilot testing.
* Attended the very end of our "Fall for Greenville" weekend event, which they were cleaning the streets, so we didn't get to enjoy it this year (again). Drill always falls on same weekend.
* Had Carpet installed in our living room and hallway (yesterday).
* Worked out probably 3 times, don't even know the stats on that.
* Not been online more than about 30min in about 6 days total! (Reason I haven't read your blogs).

Pics from the "Navy Ball"

In NH with friends, Erik & Lori 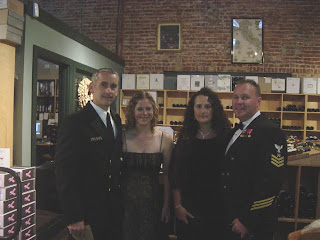 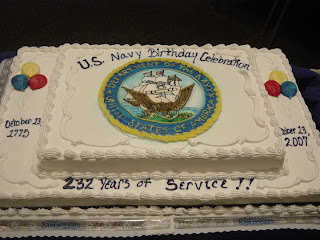 Friend, Phil giving up 6 more years to the Navy (Commanding Officer re-enlisting him) 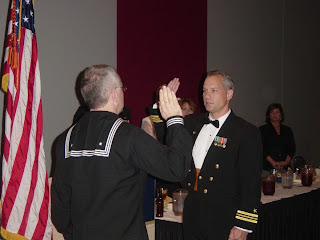 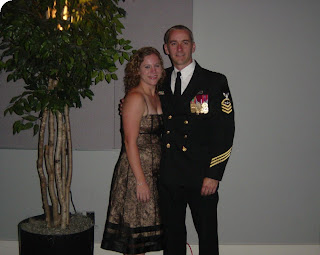 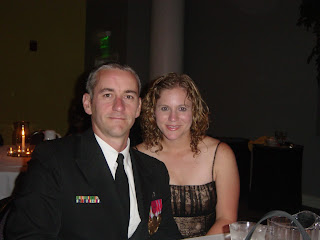 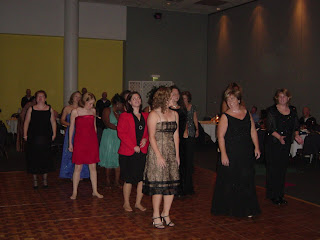 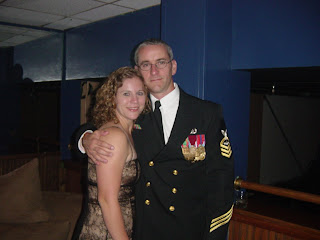 The Ball was fun, at least for us and who we hang out with! Went to da' club afterwards and again, got in free, and up to the VIP room. Reason - Men in uniform!

I did get a Mom-mobile last week and so far, I'm really enjoying the huge amount of room I have. As David mentioned to me the other day, it will take time to get used to it, as I went from driving a golf cart to a bus. That's what it feels like. However, it's not like I have never driven anything large like that. I used to drive large military vehicles regularly. We're trying to figure out what seat to get Grace for it. She's in a Britax Marathon now in David's car, and we would really like to stick with Britax, but shouldn't get her another Marathon because she might outgrow it too soon (considering what you pay for them). We went to Babies R Us yesterday and tested the largest Britax out in the new van (Regent). But, it was too large and actually would hit the door once it closed. So, now we're looking at the booster seats with the back. But, she's not tall enough just yet, and quite frankly - I'm not ready to take her out of the 5-pt harness. Decisions, decisions... Welcome any advice from you parents out there...

So, this is what Motherhood has done to me! 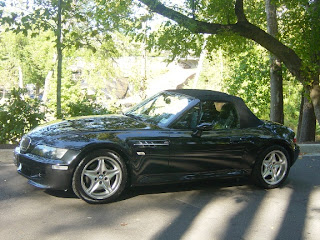 Hope my blogging buddies are doing well. Will be catching up all day today! Look forward to seeing what ya'll's been doin'.

In case anyone is wondering, it's an 07 Pathfinder SE (Cert Pre-Owned). And, despite Mendy's objections, it's a TRUCK! Yay!

Not a truck! SUV, meanie head.

WHOOOOAA... Look at those HOTTIES!! I love the dressed up pics!!!

Think I am signing on for MB Marathon (FULL)

Raaaarrrrrrrrrr look at you 2 hotties! Mendy I LOVE that dress! I almost bought a similar one a couple months back. It did nothing for my "girls" though, so I had to opt for something else. But you guys look GREAT! David are you getting intellectual on us with the glasses? Please say it isn't so LOL

All that room . . .you guys better get going with the baby factory :P

As far as carseats go . . .Keira has converts from 5 point harness to a booster seat. It's a little bulky though. Dang it I can't remember what the heck one it is LOL. I think it's the (whatever brand) Alpha Omega Elite. I'll probably end up getting another one for Cam once she's outta the Triumph, which will be soon :-X Thanks for the reminder. Eeeeekkkkk LOL

I love the new truck...I mean SUV. I did drink from the evil mom serum and have a van but this next go round I want to look at SUVs. My oldest is growing so fast I can't see him squishing in and out of a van anymore.

For car seats we have the Marathon and I hope my little guy can stay in it another year and then I will go with a booster for him (he is almost 4 now). Not that that helps at all but anyway. I love the Britax carseats but that is a lot to spend for just a year or two depending on when you think she will be ready to move out of it.

Congrats on the new ride! Enjoy all that room.

Hi Mendy - you HAVE had a busy week, haven't you?!

Glad you had fun at your ball (your dress was very pretty you two looked gooood!). And yay for wine tasting, lucky girl!

Congrats on the new ride!

(& thank you for all your sweet comments!).

I think I fixed my blog. Had an a comment posted that made me mad, so I tried to make it so that only my friends could comment, but I don't know what I'm doing! Woopsie. Sorry about that!

You two look great at the ball! So fancy.

Love the new SUV. And I like the charcoal color. But, I didn't know you were giving up a fancy sports car! Sheesh. It's up for sale, you say?

You have been busy!! Hope things slow down a little soon!

Sounds like your week was very full...hope it slows down a tad for you.....

We've got a similar "SUV" only ours is a Toyota Sequoia....grandparents-mobile if you will, even though the grandkids are in MN now.

Looks like a great party...complete with beautiful people and colorful uniforms, glad you had fun with it.

NEW WHEELS!!! I would bet that it has made things easier with Grace. Best of luck selling the "Batmobile"!!! Two car payments can be tuff. New carpet in the house... must come and see this soon.

Also I loved the pictures from the Navy Ball. You guys sound and look like you had such a nice time. no George sightings this year??? LOL!!

OK, that is not true.

She is not coming. I tried to trick you.

Boy you have been busy! You two look gorgeous and the new vehicle is lovely! I love it!

Hey Mendy,
thanks for stopping by with the well wishes. :) We're doing better out here and the air quality is cleaning up where I am at. hopefully we'll get full containment soon.

So you traded the M in for a truck...Didn't David tell you an Evo is a family car :) Seats 3 kids in the back and has room for groceries in the trunk :) Nice truck ;)