It's been a while since I've blogged - not primarily because of my lack of enthusiasm with running, and everything else, but for a multitude of things. For one, my laptop wireless connection at home has been acting up for my laptop, while hubby's has been okay, so that's been a struggle, and I get frustrated easily with technology, considering I'm impatient with it while working in the industry. I am also in Microeconomics, and am not no where near where I should be with my reading ... oh well. So far, I have a B and am halfway through with the class.

As mentioned in my previous post, I've been down and out. I have been trying to hit the pavement, but unsuccessfully am not completing my runs up to my standard or mileage, and while feeling like poo, as well. I ventured out for a positively thought out run last weekend of 11 miles, then called hubby to come get me at 5 miles in.. Not a good thing. I'm still swimming twice a week, which I feel is getting better. And I plan to ride my bike this weekend along with a swim session and a long run, that will turn out much better than the previously ones, I'm sure of it.

So, earlier in the week, my supervisor noticed I was not myself and suggested I take a day off to veg out. He actually said that I should be "UN-Like Mendy" by sitting on the couch all day, no running, and eating bon-bons. It felt nice that he always has the mental picture of me counting every calorie, and running any chance I get - However, that's just not the case, and it made me think. I was flattered - but, here lately - that sounds exactly what I would do - but, maybe not bon-bon's - pizza, or french fries instead.

Anyway, other than the lack of internal motivation being non-existence within me, I have felt off balance, and actually thought that I could have a chemical imbalance, but I'm hanging in there and just waiting to feel balanced again. So, based on what my supervisor suggested, I talked to David and he suggested I go get spa'ed, so that's just what I did. Today, I took the day off and went to Wisteria
and used the spa packaged he so sweetly bought for me. (Thank you so much, David! :-) I had a full facial, massage, pedicure, hair shampoo and cut, and walked out the door 3.5 hrs later with a couple of extra goodies in a bag, less $ in my pocket, but a nice smile on my face. I had planned to go for a swim afterwards, but with nicely straightened hair, I just couldn't ruin it for the evening, just yet. 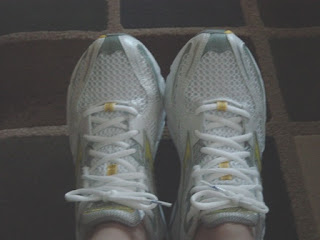 So, I did a run on Wed of 5 miles with my new shoes, Mizuno Wave Inspire (see how pretty they look ->>), hoping they ease up the pain in my left shin. They did in some way, but I'm still having pain, and today during my massage appt (she focused on my legs, mainly my calfs), she found several knots (I suppose) in my left calf, so I've got to really baby them.

(Written fri pm, as the above was from the am)
I'm back... I think I've fixed my laptop (haven't lost network signal today, yet), and I've caught up a lot in class even though I still have a few pages left to read before tomorrow. This college stuff has kept me pretty busy lately... sorry, I've been out of touch...

Here's Grace and I a few minutes ago. After getting my haircut, it looks red for some reason. Weird... 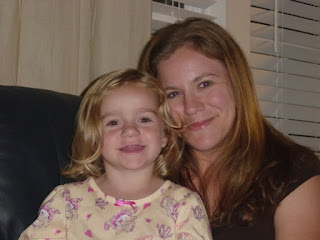 Have a nice night - apparently I'm hitting the sack here in a min with Grace, she won't let me blog anymore as I was hoping to, so I'll catch up with everyone tomorrow morning. Hope you all are having a wonderful weekend!

3.5 hours? I only paid for a 3 hour package. Must have been the "happy ending," which explains leaving with a smile on your face...

I'm glad Grace is a mini-you; couldn't imagine anyone I'd rather her look like than her pretty mommy.

awh...what a great day...a great boss and a WONDERFUL husband!!!

I'm glad they got some knots out and that you got new shoes!!! Take it easy and I can't wait to read up on your new runs!

Thinking of you lots!

BTW...that is a precious pic of you and Grace! You look like your glowing with pride!

Mendy you look beautiful!! I LOOVVVEEEE the hair!!!! ;D ;D A day at the spa is always VERY nice and relaxing! (Good job David, I see she has trained you well :P)

Very nice new kicks!! I'm sure they'll be dirty in no time :P

Hope you start feeling on the up and up! We all totally understand being busy. Don't worry about it chica. As long as you drop a line letting us know you're still there, it's cool ;D

Wow! Purty, purty! and them shoes look good too :-) David is a lucky man to have such too good lookin gals in his life! Just wait for it to come back around. It will. Having shin issues is a definite de-motivator. Persevere.

Oh, I would love an array of spa treatments, you're so lucky!

I know what you feel concenring the running and the crisis of confidence. I've been experiencing it as well -- for about two weeks -- but had a great run this morning and am finally feeling back on top of it, so I know it will happen for you as well! Chin up, you'll get it done.

You and Grace look gorgeous!! I love that picture! Your new shoes are sweet!! There is something so nice about new shoes!

I have the same nagging in my shin. I don't understand why we can't get the shins under control! I do everything I am supposed to do and they seem to come back. Grrr...I hope the massage really helped with it!

Amazingly, the shoes match the new Camelback perfectly. Hopefully they work well, since I have enjoyed them and recommended them highly.

We are both on board with the Hal now... we can do it! And just think- this week is a stepback week too :)

Hey! Glad to see you got to take a spa day. Lucky girl!
I hate to say this (and you can shoot me next time you see me) but, are you possibly preggers again?! I know I was EVIL when I was pregnant with Josie...
I actually posted pics on my blog,check em out when you get a chance!
Love Ya!

Very cool that your boss would let you have the day like that. Can David buy me a day at the spa too? Please...please... ;-)

Just keep the training low-key for a little while and I'm sure the motivation will find its way back soon enough.

Chad, you want to know what the spa day "cost" Mendy? You sure you want me to get you one, too?