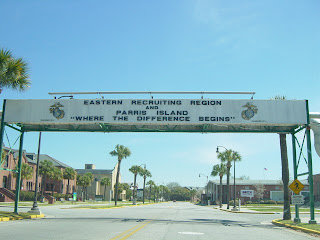 No, not me, silly - unfortunately. But, my husband, David, just did his 1st (of many) Triathlons this past weekend down in Paris Island Marine Corps Base, SC. It was a wonderful trip altogether for the 3 of us. We headed down around lunchtime Friday, and was encountering wreck after wreck on I26 throughout the whole trip. It was wet all day and at some spots pouring. We picked up David's race packet at the base, and his nerves started to kick in. We headed to the base around 0700 Sat morning, but, they didn't get started until 0900. While I was waiting, it was an interesting time to people watch. So many people (around 400 did this event), so many bikes, so many accessories - all in all - it looks like so much fun! People were recognizing each other from other events, or from online forums, catching up. Seems like a neat community.

My co-worker, Stephen, participated in it as well, for the first time. I got a chance to wish him luck before the beginning. I know, from talking to him on a regular basis at work, that he was thrilled to do the event.

David was 150 for swim time, so he didn't actually get started until around 9:52. So, it was sitting around and watching the beginner's swim for quite a while, and if you've had a toddler, you know that any sitting still can be challenging. 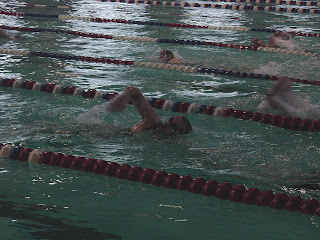 Transition to the bike... 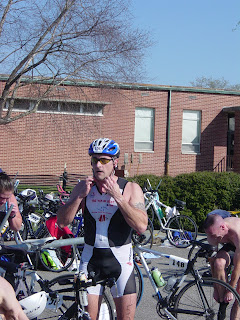 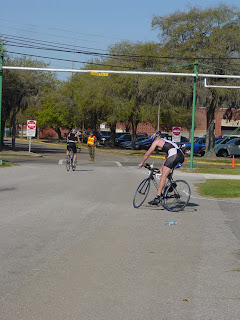 Finally, the end of the run. David is now a triathlete. Good job! 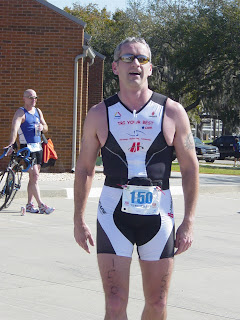 And this is Grace, bored to death. 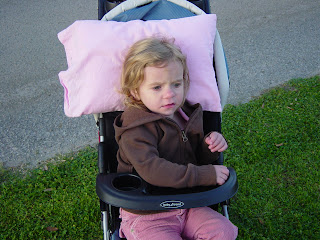 We had an excellent time! David was 68th overall out of almost 400 people. He would have been 1st in the Novice category, but since he's doing the whole series - he signed up under age-group and was 10th, with a time of 1:09. I'm really proud of him! Next up is Langley Triathlon at the end of April. Stephen did great as well and was really excited about his overall score. I sure wish I could have his 5K time of 24 something, without the triathlon. Great job!

After Paris Island, we went to Charleston and stayed with friends for the evening, then headed home on Sunday. Overall, our weekend was a wonderful time!

After watching this event, I'm more convinced I want to participate in at least one!

I recommend trying one sprint tri to anyone that enjoys variety fitness and endurance sport. It is an absolute blast!

I truly envy those that can participate in events like triathlons without the premise of competing in them, but I'm just not wired like that, and have to push myself until I feel I have reached my peak. So many folks were there on mountain bikes (with knobby tires) and had honest fun without concern of their standings or split times. That rocks!

Awesome post! I have actually been to Paris Island .. a few years ago when I was dating a marine... It's pretty gorgeous there, but I heard it gets pretty hot and humid in the summer!