Greenville Sprint Tri (about 700 participants - the largest in the series)

By the time 0700 rolled around Sunday morning, we didn’t think there was going to be a race. We woke up around 5 somethin’ to heavy rain and bad thunderstorms. A part of me was thinking that this race wasn’t meant to be for me, and David was thinking it wasn’t meant for him to do Greenville at all (last year the race was right after his wreck). We packed up, ate a little something, put the bikes on the car and was off.

We got there a little later than we wanted, setup transition, said our good lucks and Hi’s! to our friends. Rumor was if there was lighting at 700, it was going to be a duathlon at which I told David that if that’s the case, I’m bailing. I wasn’t going to start off walking, to get on my bike, then walk again. At 7, they called it a triathlon. The roads were still wet, it was still raining, but there was no lightening. As much as David felt he didn't want to do it, I sort of wanted to do what I could. However, I probably could have easily been talked out of it. :-)

I walked around, chit-chatted with people, used the (real) restrooms before my time in the pool of 7:44, which came pretty quick. The swim went okay for me. I felt like I couldn’t get my breathing together under water. I don’t know if it was nerves or what, but other than that it was a good swim. I didn’t have any issues with bottlenecks or what in the water. I thought I had 2 more laps to go and looked up and realized I was on my last lap. Cha-ching! 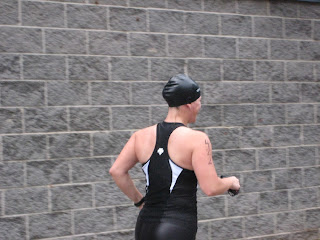 T1 was okay. I got my helmet on faster than at Iron girl, and was off. The roads were wet, and sketchy in some areas. I took advantage of the downhill speed (and unlike last year, I didn’t brake once downhill). I enjoyed the course. It’s a lot of long gradual climbs, not steap – just forever…. And it’s through the area I grew up in so that’s kinda cool. At about mile 10.5, it’s pretty much flat until the end. I came into transition, put my running shoes on and walked out with my friend Denine who was our spectator photographer. 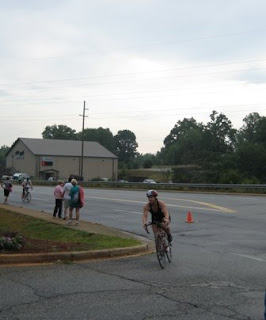 The best part (to me) of these tri’s is the socializing afterwards. We got some food, and talked to almost everyone we knew there. We hung out for the awards to watch friends walk away with wine. Yes, wine. Team Long (Ashley) took 2nd in the relay. They are the fittest family I know. 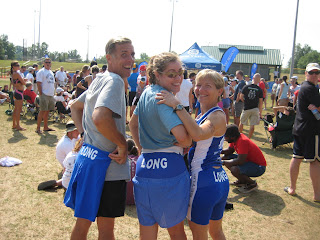 I did improve some from last year, shaving 7:45 off of swim and bike combined. I do want to get more time on both, and hopefully start running again next month.

After the tri, we had appetizers with David’s teammate, and his wife, then went to what’s gonna be the new “go tri sports” store in Greenville. They were having a par-tay, to celebrate the new store opening soon. We stayed a while, stuffed our faces, and had to hurry home for showers. Before heading over to Ashley’s party for all the tri peeps, we picked up our little lady. Ashley was the ideal host, opening up her home for us to invade and feeding us food from Salsarita’s. Yum-Yum. We had a great time at her place, so thanks for the invite, girl! Grace got to play wii with some other kids. Thanks to Ashley, Grace also went home with a bunch of cookies for the evening. She’s already a night owl, but with extra sugar in her – Oh my!

Yesterday Grace started her 2nd set of swimming lessons, and while she was in – I got in to do a few laps. Plan was to go as far as I felt. After a few laps, I felt I couldn’t get it together and my shoulders were even a little sore. So, I called it a day at 1000yds.

I also got to see Dr. Bob again yesterday about my legs. My right leg (which was the culprit) is doing a lot better. My left shin is acting up, probably due to compensation, so I need to apply the same therapy to it as I did my right, and he said when they both start to feel better when I power walk, I can start running. He said, probably sometime mid Sept. I’d have to start with a run/walk for like 15 min at a time. That was great news for me! I am really taking this injury serious. I've seen myself go through many years having what Dr. Bob hates to call shin splints. I'm sick of going through this. I can remember my first race about 13 years ago. I was told 2 wks before the race (by a military doc, so not the best dr's, imo) to NOT run on it for a month or 2. I didn't listen and did the race, anyway and throughout the years - ran through it. Recently, it just got unbearable. So, I really want to clear this thing up, once and for all. I'm even considering buying new shoes, maybe even switching brands (Marcy, I might even try your Nike's), just to see if it helps when I ease back into running. I have one more running race on my calendar for the year. Of course, if I heal and start running I might add more. So, with all that said - Thank you - thank you - to all of you out in blogosphere for lending your advice and having an ear to listen to me whine during all this. It's been a roller coaster for me. ---- I want to run.

Well, I have no idea what my next triathlon is going to be. It really all depends on my legs and when I start running again. I really want to do another one by end of season.

Catch up with all you bloggers tomorrow. I'm beat down and ready to turn in.

Glad you enjoyed the race. Good luck with your recovery and getting back to running.

Glad you had fun, that'll boost your spirit girlfriend!!

Sounds like you did great! Good job on the swim and bike. Be patient and you will be running in no time

Only the awesome athletes stuck around and raced. You did awesome! Hopefully you can sneak in one or two short tris this year.

Awesome job! I'm glad you had a good time. Think about maybe replacing your insoles. As a heavy guy, I know this as helped me :-)

Nice to follow up any race with a eating-fest. Can hardly wait for the new store to open!!!!

So glad you took part in the Tri.

Sounds like a great race and a wonderful time of socializing and having fun with friends. SO jealous you spent time with Team Long! :)

Hope your leg(s) recover soon and you're back out there full force!

Great job getting through it when you originally thought you couldn't!!! Congrats :)

Great job, Mendy glad you stuck with walkind the run and letting yourself heal up. Keep taking care of those legs. I hope a full recovery is just areoun the corner. HAHAHA at Grace's late night induced by sugar, totally understand those nights.

With Grace in swimming lessons already - give it a few years and YOU guys will be the fittest family!

Hope your legs are ready to "kick it" soon.

WHOOO HOOOOO! Alright Mendy!! Awesome job, especially with the shins being all messed up. Finish any way you can, right? ;-)

Ooooo I *heart* my Nikes, but I swear I'm the only one :P

I'm happy for you for deciding to walk it out.

and for some good news from the doc about your leg.

Great job, glad you had a good time!

That was a HUGE amount of time to shave off!! Good for you!

Great job, Mendy! I am so proud of you! Glad to hear the legs are doing better!

Great job! I have been reading your blog some, but this is the first time I've commented. I have a friend who lives in Greenville, and she's been doing some of these same races. It's fun to read about your experiences.

what a fun day!! so glad you guys came over - my mom loves Grace (who wouldn't!?) now lets rehab. pity party one of these days?