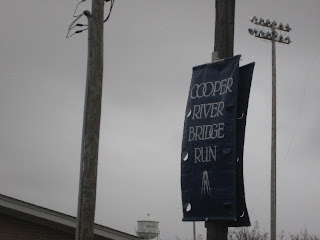 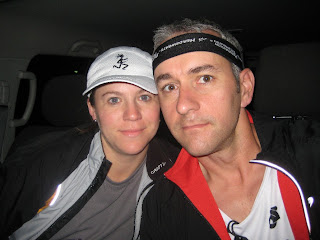 Cooper River Bridge Run 10K was a fantastic race for 2 groups: walkers and Kenyans. If you're not either, and are an actual 10K runner, don't expect this race to be your running race.

I'll explain. There were 6 seeding groups, as follows: (quoted from the site) You were seeded with a colored race bib to tell you what area to slide into.
Walkers (or people walk-running)
Runners with an expected time of over 1 hour
Runners with an expected time of 49 min to 1 hour
Runners expecting to run under 49 min (and any age-group contenders)
Runners sub 40 minutes
Invited/Elite runners

I signed up under my REAL prediction for runners over 1 hr and had a purple bib. The walkers were supposed to be pretty far back behind the last running group. Nah... some were, but not all of them. I knew I had a challenge ahead of me when I saw a man and his baby stroller next to me when we were taking the 10 min walk to the start line, after the gun went off. He had his baby in a stroller, not jogging stroller either and a backpack on. I think it's safe to assume he was not running this race. And, baby strollers apparently were not allowed. I probably saw about 6 more. 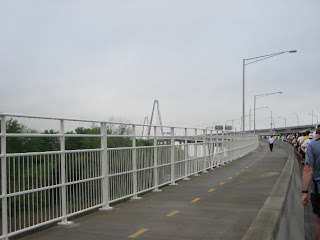 From the beginning of the race, I was dodging the leisurely strolling folks out for their Saturday walk over the Cooper River. Now, don't get me wrong. I think it's great to walk for exercise and think it is even better to do it for 6 miles and who can resist the gorgeous bridge to walk over? However, I think they should have some consideration for those that want to run the race from the start and have stayed back. I really couldn't get over how many people I passed walking. At the base of the bridge there was such a bottleneck that it was hard to get around anyone, then after I got almost to the crest of the bridge, I was on the far left side (as far left as you can go - see pic), and I got stuck and couldn't get around anyone for like a minute. Then, I just pushed myself through. That's not normally me, but I wanted to run ... and I felt GOOD. 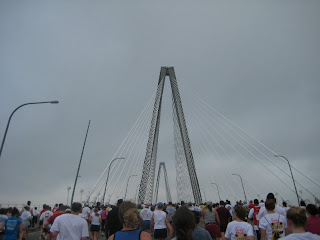 Like David mentioned, the bridge wasn't bad at all. The incline didn't feel tough and the slope downhill didn't feel like a downhill at all. It's a 2.5 mile long bridge (roughly), so I suppose it's so gradual you don't feel the slope at all. Really, I ran the entire bridge except for the part I got stuck behind some walkers, and there was one walk where I stopped to get these pics. I, however moved to the far right so I could be out of the runners' way. :-) 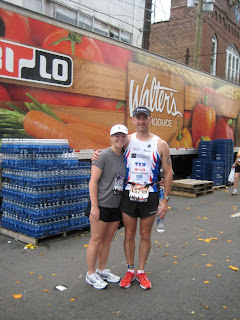 All in all, the race is great! Yeah, it is a big crowd and I typically don't like big crowds either, but this race is one we've been wanting to participate in for years. I really like Charleston, and always have, so I'd definately do it again. I will just be faster and sign up for a better corral, or I'll walk it completely. Obviously, I didn't PR at this race, but I would have. I know it. I had a good race, and I rarely walked. My legs felt great. At my last 10K (Mar 1), my time was 1:06:29, and this 10K I was at 1:07:27. So, I need to find another 10K to do, because I know I can better these times.

The rest of the weekend was fantastic! My Mom and her boyfriend went with us and babysat the little one while we ran. We got back to the house at lunchtime, showered quickly and went to get some yummy food, then headed downtown to walk the market. We barely made it to the truck before the storm swept through and poured rain out of nowhere, or so it seemed. Sunday was another great day filled with a little shopping, enjoying Charleston and driving along the battery. We also stopped by Folly Beach to see some waves. We got back pretty late, and I had to quickly sit down, study and then take my quiz for my class for the week. Luckily, the drive home let me finish the needed reading I had to do. Some 40ish pages.... Blah.... So, after that - it was time for me to turn in. I'll catch up on blogs today sometime.

Here are some pics from the weekend! 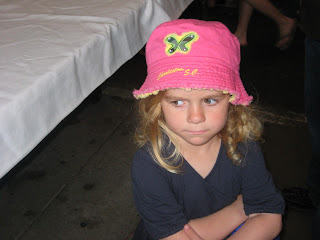 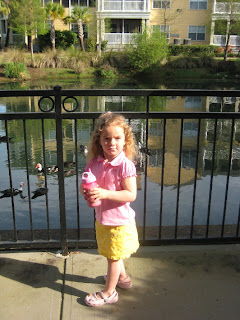 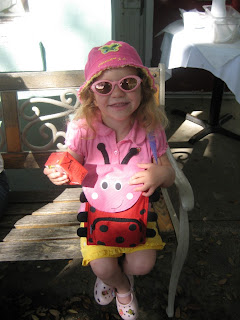 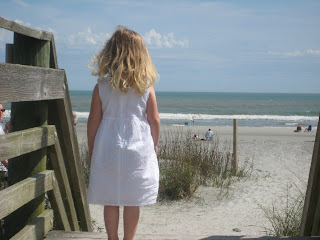 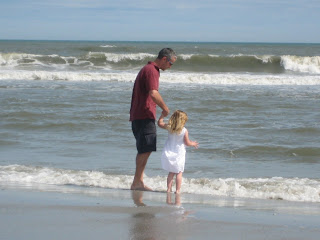 Mom, Grace, and I 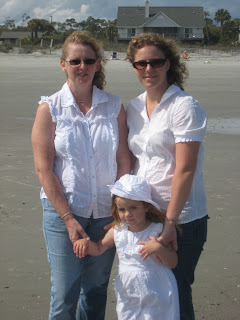 I think she likes the beach 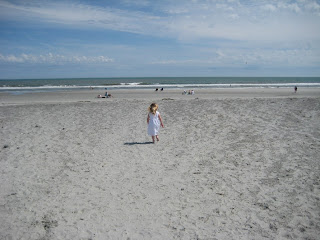 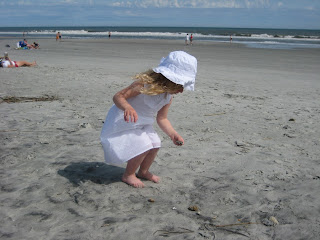 Can anyone guess what this is? 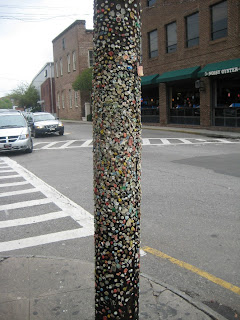 Gotta go and do some work. Plus David keeps sending me links to real estate in Charleston. Something about wanting to move back....

Charleston is a beautiful city. It reminds me so much of Mobile. I could so live there too. We actually drove across that bridge on the way home, as Dee Dee and I had to make one stop at the beach on the way out.

Great stuff! Love the pics...especially David with the head band! I think that pole is covered with gum...? yes?

Nice job on the 10K. I love all the pics! Especially the ones of y'all on the beach. How beautiful!

You look great!! Nice running. I hate getting stuck in the walkers. You can do 10k on the 10th for your next PR!!

Grace is adorable as usual!

Great recap and pics! It look slike you guys had a really nice time! In all the years I worked at BI-LO as a research analyst I never ran the CRBR. :-(

Glad that you guys had a great run!

Chawston is a great place (even with the large number of yankees that have infiltrated her) ;-)

Wow I can't get over how many peeps were running that thing. That is insane! I'm glad you had a great time, it looks like it was ;D ;D

Nice gum pole ROFLMAO! Was that supposed to be "street art" or something? :P

Oh sorry on the way it was broken up. I know you will get that PR on the next one for sure.

Beautiful pics, I love that one of Grace with her lil purse and glasses, too cute!

WTG on that long swim, and sweet pace!!

Super cute pics! Yah try to find a low key 10K close to home. Those are always the best.

We saw a gum "spot" like that in Seattle! Ewww!! LOL

Sounds like a great weekend even if the race was crowded!!!!! That looks like eve more people then PF Chang's!

Your time is awesome!

Love the pictures! Is that your mom or your sister? ;>D

I ran the CRBR in 92 and it sounds like it hasn't changed a bit, It is a great time though. Great pics and always good to visit Charleston.

Great pic of a lightpole with staples and paper remnants. Or is it a lowcountry massage pole?

Whoo Hoo! Congrats on feeling so great during your run. Silly walker getting in your way... :)

Those beach photos are awesome! Grace is SO darn cute!

You did really well on the 10K, especially considering the crowd. And while it looks ool, I just don't think I'd be up for that many fellow runners.

Loved all the pics!

And I'm guessing a gum pole?

I love Grace bending over in her white dress to pick something up in the sand......

how far would the move be for you??? LIek you'd need new jobs??

I have soooooooo wanted to do that run. Sad though, since I'm neither a full-fledged walker, nor a Kenyan ;) Someday I'll make it work with a business trip out there :)

I love the picture of David and Grace on the beach - very sweet!

I love the pictures.

Now I can't understand why walkers were in your group or too far forward. They shouldn't care about how long it takes. That is something I don't like about larger races...people who seed themselves WAYYYY too far forward slowing down the rest of us...and trust me, I don't need to be slowed down!

Nice run and GREAT pictures! I love the pic of Ms. Sweatpea at Folly Beach, that should be a poster!

Wow, if you move, there will be a place to visit and run!!! COOL...hahahaha

You have such a photographic little girl. She looks so much like my little one. We need to try to get the two of them together one of these years when we meet again for another race.

Fantastic pics. I love the ones of Grace on the beach - definate framers!

Good job on the run. It's so cool that you guys do races together. I want that. I think that will be a priority in my next boyfriend (if and when I'm ready to date again).

Girl, I am totally with you- the last 3 years I have run CRBR have been exactly the same.

Glad you had a good time in my city... next time we need to all meet up- I LOVE to play tour guide :) Or you could just move back?

Nice job on the run (even though there was a lot of dodging to do...). And way to keep the same pace on a long swim!!!