The good, the bad and the ugly.

Glad that race is done and over with. As much as I was looking forward to it, it didn't turn out like I'd hoped. But, I only have "ME" to blame. We both were pumped on the way down, cranking tunes like Linkin Park and Audioslave, talking about how great it was gonna be - the start of the triathlon season. All to fall apart by lunchtime on Saturday.

I say fall apart, but we both finished so no DNF's. So, all in all - that's good, right? I'll let David tell you all his story.

I went into the race thinking "It's for fun" and "I hope I do better than last Aug". Well, I had fun and did better than G'ville in a few categories, but have realized like the running races, that's it's got to be more than that for me. I want to be pleased with my time, not so much pleased with it stacked up against everyone else (because that would be a LONG time away from now), just with myself. I wasn't. 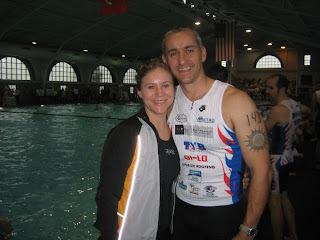 We got there fairly early, in plenty of time to do everything we needed, sit and wait, and chat with friends. David even went on a pre-race ride with some team guys. We were in high spirits and even "I" had a positive attitude. Yes, I know - hard to believe. Picture of us before the swim, taken by Robin's friend J. The tri started at the nice hr of 9. David's swim time was 9:30 and mine was wayyy later at 10:15. I watched some of the team guys leave the pool, into transition to the bike, and even caught David leaving the pool before I needed to go in and get myself situated in the water. Despite all the people saying the pool is usually VERY hot, it was quite a little colder than what I'm used to at the Y. Anyhoo.....

Swim:
The swim, I think was okay. Not great, not bad - just ok. I had thought I'd do the 500meter in 12:00, but I came out in of the pool, ran outside and hit the transition mat at 13:13. I didn't have people trample or swim over me, so that's good. I had 3 people at the most pass me, at the wall and I even waited for someone to pass me at the wall. I passed 1 guy at the wall, so all in all - it was okay. I think I didn't consider the time of leaving the pool, and transitioning in my overall 12:00.

Bike:
As I started on the bike, I could see what seemed like EVERYONE returning from the run. The run and beginning of the bike course were on the same route, which IMO can be good and bad. I saw David returning from the run and a few other friends, so that was nice. This course is pancake flat so there was hardly any gear shifting at all, except when I first started out. I had expected to do 15mph, but ended up with a 16.24mph for an 11.9 mile course (Supposed to be 13 miles). Not bad, for me.

Run:
I bonked on the run totally! I started out, not feeling good as it was, and it was getting hot. I just felt tired. I did a run/walk which I'm not proud of, but that's just how it goes. My time was not great, and 3 min over what I wanted to do this in. I trained harder with the bike/run than I actually performed Saturday on the course. I know it's all mental and know that it was my self-doubt I have about myself that drove me to sort of give up. I have ALWAYS had low self-esteem for myself and it's been hard in every area of my life, to get past some of it. Obviously, I have a long way to go.

Lessons learned:
1) Don't give up on the run! You can run, Mendy
2) MORE bricks!!
3) More swimming, and more focus on technique.
4) More biking - better yet, harder biking.
5) Need aero bars for my bike.

After a disappointing finish, and some lunch, we attempted our 3.5 hr drive home, and quickly realized it was gonna take longer than expected. With storms, a parking lot on I95, tornados, and some back tracking to come up through Charleston, it was a LONG way home. Grace stayed with Grandma another night, and we got to go out for a recovery ride yesterday morning. Yes, David stayed with my slow arse for the almost 10 mile ride.

Today is some swimming and running. I need to work on both, so from the mouth of David "It's on like donkey kong". 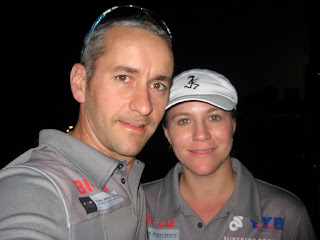 Time to kick the training up a notch!

First off, great job on the race. You came in ahead of your goal time and that is AWESOME!

Second, when you do something good, leave the negativity out!! We don't compare our times to yours. Don't you worry about us. You had some great times in that tri, and that is definitely something for you to build on!!

Finally, glad you guys made it home OK. It was definitely a nasty weekend!

Way to go MENDY!!! I'm excited for you... for exceeding some goals, and leaning valuable lessons. Great way to kick off the '08 tri-season. *look for some clip-on aero bars (can be attached to your road bike - and will make a big difference). Congrats! Now, keep up the training!

Now that I just harassed David for his report . . . :P

You DID AWESOME!! I don't know the whole thang with tri's and stuff but 3rd place for Athena (and no you are not overweight, you silly!) Athena category is not big IMO (isn't only 150?!) IS WONDERFUL!! Just that little kink in signing up, BUT STILL! That's pretty freekin rockin, especially considering that it's only your 2nd one! You're being too hard on yourself. If this is "disappointing" to you, just think of how killer you'll do when you're on point :-) GO MENDY!!

Good job on the race!!! Don't be too hard on yourself, that's too easy to do especially when you are just getting into this.

You've identified stuff to work on, so just focus on that.

It sounds like you did a super job to me! Congrats on acheiving another goal of yours!!

Mendy you did a Wonderful JOB! First of the season...with great results, you are allowed a pity party but for only 10 minutes at a time...girl, you were GREAT!

and NO you are not in the Athena category, (which by the way is much nicer term than what it is called here in Canada, Clydsdale, nice)..anyway, Mendy you are new to the sport, you did so well, you are doing it for YOU no one else....never compare, that would make all of us crazy if we compared to others....do the best you can do on the day,.....

You did great, and since you ARE DOING MORE tris, you can focus on the areas to improve. Maybe your awesome husband will even hook you up with some sweet gear and help pimping out your tri stuff and techniques.

Keep the drive, and next time it will be better.

Oh Mendy, it sounds awesome. You beat your goal time??? So you bonked a little on the run, it's probably cuz you kicked so much A on the bike. I'm just worried about finishing. :D I think you did awesome on the second try. I'm really excited for you. I know what you mean about the self esteem crap. It haunts me too. I figured people really aren't looking at our times and we ROCK for being out here.

Way to stick it out, Mendy! YOU were great! I think you're being a little too hard on yourself, frankly. You set a goal and you hit it! THAT is something to be happy about. What's even better is that you can see areas where you can improve and you absolutely will! Those pictures are great of you two! It was great to see you there and look forward to seeing you at more races this year!

Congrats on a great race! I'm in awe of people who can even finish a tri, you rock!

It looks to me like someone rocked the race!!!!!

I think you did awesome! way to rock it! Donkey Kong style! :)

I know everything is relative, but nothing about your race report strikes me as anything to feel bad about.

Great job Mendy! You guys did great and the shirts look great!

Awesome Job Mendy...sounds to me ur a bit hard on urself but to be honest that's OK...u want to get better and ur just figuring this TRI stuff out :-) ...I think u got a good feel on what u need to work on.

OK let's talk about the running part, I will say that run/walk is good as long as ur walks are brisk, focused on a time and then back to running...so a 8 min run/1 min walk technique as one example works well...

anyways, Awesome Job and like u said GAME IS ON :-)

Sounds like you did great and improved from the previous race. That is how it is done. Heard you guys over at Java's. Keep up the good work.

Print out those "lessons learned" adn read them over and over again. You have it Mendy!!

Congrats on your finish!

I think you did awesome!! Better than you hoped for & there is nothing wrong with run/walking. I too am a down on myself kinda person. I didn't quit the half I was supposed to do april 12 (my first too); but it feels like it. I generally quit first so I don't fail. Stupid I know, but when I'm doing whatever it is, it seems like the best option.

This time I was on top of it & running & committing & now I’m out for I donno how long......long enough to knock me out of this half.

I can't even consider the whole multi-sport thing!

First of all, good job!

Keep it up...you are doing awesome.

You just completed your second tri, so that in itself is fantablous!!
The pool swim would be confusing for me, listen to me. I have not even done an open water swim..hehehe! I am so glad you did not get run over, whew! It could have been the hot water threw off your projected time for sure. Even still nothing to sneeze at at all.
AWESOME, on the bike you Lance Armstrong chickie! Wow, just
fantastic bike time!! The run, you did what you had to do to finish, still again nothing to sneeze at
:-)
Those transitions
are smoking!!! Let me know how it goes if you get the aero bars, I have serious fear of that.I know from me, it may not seem like much Mendy, but I am ecstatic on your time, and your performance! WTG, on getting in this multi sport world and keeping at it. I think you ROCKED this tri, and will only get fantasticer!! It will not be long till you will be placeing in the age group.
getouttahere athena, no way!
PS super cute pics!

*placing high in your age group..

Congratulations! I've never done a tri (I'd like to, but haven't gotten the motivation up to train), but it sounds like you did a fantastic job! Don't sell yourself short :)

You FINISHED and that is awesome. Tri's are not easy - that's why only you special few can do them! (myself NOT included). You did great and you'll just keep gettin' better!

Great job, Mendy!!! I'm so excited for you and just amazed at how great you are doing as a "beginner." I'm still watching from the sidelines! :)