For one of the best weekends I've had, I'm at a loss for words, so I'll just show some pictures and maybe it will all come to me. It was in Phoenix this weekend with fellow bloggers, Lisa, Lori, Marcy, Karen, Tayrn, Eric, Pat, hubby, David and many others, including Clay (Tayrn's hubby), and JavaDad. We had a crazy, fantastic time with laughs constantly, even though most of it was laughing AT Lisa, not with her... :-)

After arriving in town, we met the infamous Tewonda 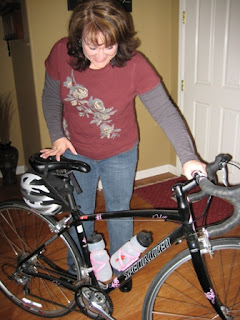 A bathroom shot dedicated to Marcy from Friday night


David before his first "official" Half-Marathon. 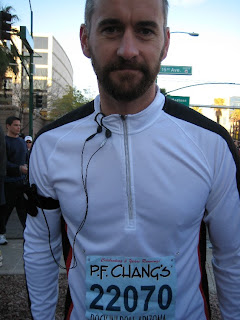 A little about the race, itself. After all, that's why we went? Well, originally....

When we started the race, I heard a guy behind us say "I don't know if it's the runners high, or VODKA", and Yes, He was talking about our crew. And, NO there was no vodka. Marcy had drank it all the night before... j/k. So, needless to say, those first few miles were a hoot. We had many bathroom breaks, rocked with the bands, high fived the cheerleaders and danced along the way.

Going into the race, our goal was to have fun. We got there and we REALLY wanted to give Lisa her PR for this race. All was going well for the first few miles for her. But, after a while (read her race report), she hit a wall, and Lori, none other than the under trained, Ms "I only did 7 miles as a long run" dug into her own tank, put aside anything else and focused on getting Lisa across that finish line no matter what... and I do mean that. Lisa was begging Lori to let her take breaks, but Julian, I mean Lori, wouldn't allow it. Lisa got her PR! Lori was amazing! in both leading Lisa to the finish, and running for 13 miles, when her longest run was half of that. Adrenaline shot blocks, and perseverance.

As for the rest of us, we scatter along the way.

Taryn had a goal time in mind, and after a few miles with us acting like lunatics, decided to do her own thing. I am always a solo runner too, Taryn, so I feel ya. I never could get focused at all, but I'm okay with that. I actually needed the support next to me during this race. You did terrific, Taryn, and I'm glad you achieved your goal! You were sweet to stay with us those first few miles, and I enjoyed running with you. Hope to see you again!

Somewhere around 5ish, I think, Karen broke off from us. She needed to do her own thing also, and I don't blame her one bit. Sometimes it's better (physically) to go your pace. Despite the pain in her legs she had, she did terrific and even had a PR too! I was happy to see her after she crossed the line!

Miles 5ish - 7/8 were a little distorted because I had to use the ladies room BADLY. Marcy and I were looking for port-o-johns for quite a while. Why were there sooooo many in the beginning, and none to be found now. We finally found some, and told Lori and Lisa to take off around mile 8.5. They needed to to get Lisa in in her time.

Even after my bathroom break, I didn't feel like I was 100%, in fact I was more like 50% at this time. I felt a little better, but not good. Marcy and I ran through the last few miles together and she is the best, most supportive person I've met. Really, this was such a leisurely jog for her, and not once did she sigh or complain when I had to stop to straighten myself up or walk a little. The ladies have touched in their own blogs about me "not feeling well". I felt horrible the entire race, and all these girls were very supportive of me, and kept throughout the race asking me if I was okay. I wanted to so badly to catch up with Lori and Lisa for the finish, and regret now that I didn't push myself to do just that. That's the only thing I wish I could have done differently. I couldn't help that I had severe menstrual cramps (sorry if TMI) the entire 13 miles. I've had to have a surgery because of problems in this arena, so I'm not normal, when it comes to this subject. On top of that, I had GI issues too. I've never ran through anything like that before. I hardly ever even run during it, much less 13 miles. My stomach was sticking out so far, that you'd think I was 3/4 months pregnant (and NO, I'm not). I had to stop a few times and straighten my body alignment after being hunched over a bit while running. I had NO nutrition the entire race, with the exception of 1 cup of Accelerade early in the race, and then water only afterwards. I didn't want to make matters worse with my tummy so I didn't take that chance. So, that's my excuse of the not so good race (for me).

Marcy and I crossed the finish line together and I was so relived that I finished, considering how I felt the entire race. We both raised our arms in honor of Lisa, who finished ahead of us. Marcy is the BEST!!! She could have at any time in the race, ran off and did her own thing, but she chose to stay with us, and then me for the last 5 miles. I owe her!! After we found Lisa and Lori, I headed to the medical tent for some Tylenol, then headed to the beer tent to wash it down. :-) 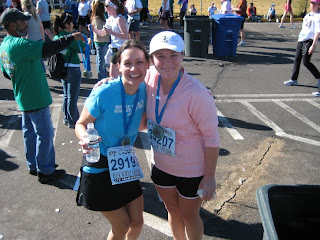 The Ladeez and our medals!


One of my favorite pics...


The weekend, as most of you can tell was Fabulous! We all got along so well, laughed a lot, drank some adult beverages, ate a TON of food, and just really enjoyed each other's company. I couldn't have asked for a better weekend with these wonderful people! BTW, Lisa made us all honorary members of the Tumbleweed Running club and even got us shirts. How cool!!!

I haven't caught up on blogs, so plan on doing that today, and maybe finish tomorrow, so sorry everyone! I haven't forgotten about you. We may get ice on the roads tonight, so for SC, that means probably no work tomorrow. Yep! We Carolinians are sceered of the ice. Of course, if Grace's school is closed, she won't be going - Therefore, I won't be at work!

We have a busy time ahead of us, with my drill weekend this weekend, and getting house projects completed. I hope you all have a wonderful hump day. Hump day for us is Mexican Food night! Yum-O

As far as running goes, I haven't had another run yet. I had hoped yesterday, but didn't feel well. I was thinking this afternoon, but maybe not. Still not feeling good. I'll get one in this week then will do 8 this weekend. I have another Half in just over 4 weeks to prepare for!

Thank you, Jess for commentating all the updates on the race! Hope you can come to the next Javafest!!! We rocked a picture JUST for you. Hope you like it.

You were seriously such a fighter! I can't imagine how crappy you felt or how drained you were in general. Your body was revolting big time against you! I just hope you don't have to go through similar issues during the next one :(

I can't wait to run our next one together!

All you gals (and David) had such a great time. Tell David if he doesn't want to be the only man in the group, I'll swap with him next time ;-)

Way to be mentally tough and finish that sucka, despite the TMI issues! You ROCKED!!!

AWESOME! I'm still smiling after reading this! How cool was that trip? I know you had a lot of fun!

LOL I'm not the BEST, you are!! I can not imagine running a race and feeling that bad :-( Not once did you whine or complain just walked when you had to and ran when you were able. I was SERIOUSLY amazed at how far you could go without a BR. That was just NUTS!! The only thing I'd change about the run? Was you feeling better :-) I had a blast and it was a treat to run with such an awesome person in the last miles. I think if I learned anything, it was just how Southern you are LOL (I don't mean that in a bad way) You're sooooo polite! Even stopping to put the empty cups in their proper locations ;-)

We TOTALLY have to get together again, even if it's for IMAZ (you all can count me out of that one but I ring a mean cowbell :P)

Awww!! Mendy! I loved your report! I love to read all the different versions! So fun!!

You were such a fighter, just amazing!! I can tell you that I would have thrown in the towel for sure if I had cramps! Not only did you keep running you were running when I wanted to and not you! You totally rock girl!

Not to be too gaybo but I totally miss you guys. It's so quiet around here today.

Looks like a blast! I don't understand why beer tastes so good after a race. It's the only time I drink it really.

Loved your report Mendy, never too long when it comes to a fun weekend like this. Thanks for sharing the pics and good times. So sorry about the female issues...I've been dealing with a bit of that myself lately. Have a good day at home tomorrow if it ices...as long as we don't lose power I'm all for a good pl' snow-ice storm! :D

Great photos! Looks like you had a wonderful time! Nice job on your race!

I would love to do a race with some fellow bloggers sometime!

Geesh Mendy U are a fighter to do the race on Zero Fuel...Way to get it done and finish!!

Love the re-cap *& the Pics are great! U guys truly had a blast, very cool!

Awesome race report. You're such a trooper for running a half while having cramps. I don't think I could do it.

Well, you had a great race despite the issues. You ran through more than many would have!

Dang, I REALLY wish I had been there now!!! Looks like you guys had so much fun!

Awesome job Mendy fighting through. Most people probably would have dnf'ed, you got nerves of steel and apparntly a stomach of steel:) Sounded like a great weekend with great people!

Ahhh,nice report, very fun to read everyone's accounts. And love all the pics. That's my girl washing down the tylenol with a beer!

Thanks for all your nice comments. It's so fun to find other people who are going through the same things, see how they handle things, get encouragement, etc. Thanks for checking in on me.