I love being a Sailor!!! Sometimes, that is, and last night was one of those times! I am not a huge fan of baseball, but when we (our group I'm here with) was asked if we were going to go to a Yankees game, I shrugged and said "sure, why not". While we were waiting for our laundry to wash tuesday night, we went to a mex restaurant across the street to kill time and met some men and their sons, and they insisted we go to a game, if we could. It's the biggest games of the season NY Yankees/Boston Red Sox. So, we got physched out for it. One of our guys is in a Boat Coxswain's class with 2 NYC cops, who told us to go to the stadium, ask a cop from the mobile team station if they have some extra tickets (they usually take from scalpers). We did, no tickets. Next resort - ticket window. The guy in front of us was told 1 ticket by itself for 280.00. Wow. So, we got to the window, my buddy shows military ID, she tells us to go around the corner to the press entrance, show ID. We did, and then told that there were NO available seats, sold out game. But, since they liked the Military, they let us in anyway, told us to go to the very top and see if we can get some seats. We did, and 1 row below the VERY Top... and this was our view. 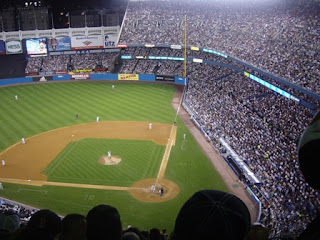 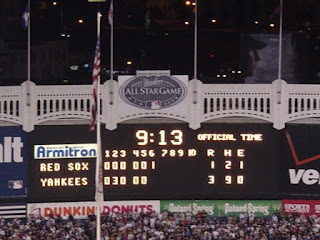 It was just so much fun seeing the passion of the game and especially from where I was sitting. We got there in the 4th or 5th inning, so didn't get to see the start of the game. But shortly got our beers and hot dogs, sat back and watched a great game. My buddy Chris, (a huge Red Sox fan) is gonna dis-own me as a friend now, after seeing this picture... 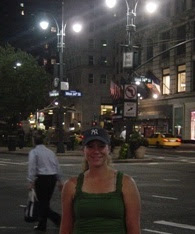 I gotta tell ya, NYC people have been far way better than I had imagined. We've had such nice people to give us directions through the hectic, crazy to understand subway stations, to/from Penn Station, and just help us when we just "look" lost which was most of the time - super Nice people. And, they LOVE the military here. To get into a sold out game, where the lowest remaining tickets were 280ea, with just the flash of a Navy ID card, free, is crazy! So crazy, we're going back tonight!!! and blowing off the Stomp Broadway show we were going to go to. At least, this time we know how to get to the stadium.

I'm exhausted right now. After a wait at Penn after the game, and an hr train ride back to the station, I got in at 2:30 this morning and was up at 6:30. So, I'm on a coca-cola high right now, just after taking my certification test - and based on how I felt about it, I'm now certified in Network Security. Nice new bullet on my resume. :-)

I haven't done much of exercise since Monday, but when I return - I'll be back in full swing. And, Yes, David - I am ready to come home and see you and Grace and enjoy a nice weekend with you watching the US Pro Cycling Championship in our good ole' G'ville! We get out of class tomorrow around noon, and we'll already be checked out, then head downtown again. I'm going to go for my much anticipated run in Central Park while the guys wait on a park bench. I'll change and clean up at the airport and arrive back in gville around 9:30. Looking forward to seeing my family!!!

Glad you are still having fun, and good job on the test. I told Chris you called it a Yankees/Red Sox game, and that I corrected you. I think the hat will be the last straw, though.

For those that don't know, our local team is a farm team for the BoSox, and the field is actually a small scale replica of Fenway Park. So we are supposed to support the 'Sox, as loyal Greenville residents. (hrruumph)

Glad your having fun and I'm so jealous you got to go to a Yankee/Red Sox game! Be safe!

I dunno Dave! There's something about being smelly and sweaty ;-) Have a great trip back! Good to hear that at least some of the bad publicity about New Yorkers is just that, bad publicity :-)

ROFLMAO Wes!! Ahhhhhh I knew I could come back to someone's mind in the gutter :P Just what I like LOL

Awwwwhhhhh Mendy you're so cute!! I'm glad you had a great time at the game. Go Yanks! :P

That would be a cool game...if it wasn't between the insufferable Yankees and the even more insufferable Red Sox. Oh well, at least you got in for free. Have a safe trip home.

Holy Cow!! What kind of crapy hat is that?? Scott is going to die when he reads your blog. Should I even tell him..... need a beer for this one.

If I liked baseball, I would probably be more impressed, but it still sound slike fun!

Sounds like so much fun! I am a fan of neither team, but I still wouldn't pass up the opportunity to see them play each other! And I would have been one of the crazies that would have paid the stupid money to get to :P

Sounds like FUN!!! Hope yall have a nice ole' weekend up therrrrre :)

Sounds like such a fun game!! I love the pic!! So cute! I hope David kept the house clean for you!

What a great stadium! I love that place! Glad you had a good trip!